The Customer is [Not] Always Right

0
By John Stocki Posted on September 28, 2016 in Restaurants

If you’re like most chefs, you’re a bit of a perfectionist. You want every plate to look immaculate and you expect your restaurant’s service to match. Unfortunately, even the most meticulous of restaurateurs will fall victim to bad online reviews at some point. They can really sting, but I’m here to tell you that the customer is not always right.

Chefs and restaurateurs have realized that online reviews matter, but they have to be taken with a grain of salt. Letting them become a distraction, or worse, letting them drive what comes out of the kitchen, can cripple a restaurant. The “customer is always right” mentality is being challenged by the “take it or leave it” school of thought.

To Respond or Not to Respond?

Everyone with an iPhone and a Yelp account thinks they’re a food critic these days. Even though they’re not, they could still have some very valid feedback. Especially if they followed our guide on the right way to leave a one-star review. Keeping that in mind, how you should respond (if you choose to) depends on your unique situation.

Are you a well-established high-end eatery or a newcomer to the scene? Is your reputation as a venue and chef so solid that people will disregard a poor review or are you still trying to make a name for yourself? If you’re going to get involved in a public conversation, make sure you look at both sides of the situation…even if the reviewer didn’t. And remember, if you wouldn’t say it to someone’s face, you definitely shouldn’t say it online.

If you were one of my clients, I would recommend that you pay close attention to your online reputation and frequently engage with reviewers. When responding, understand that your comments will be read not only by the person who left the original review but by many other potential customers who are checking your reviews prior to visiting. How do you want others to perceive how you handle customer feedback? I’d shoot for humble and appreciative rather than arrogant or condescending, but hey, that’s just me. 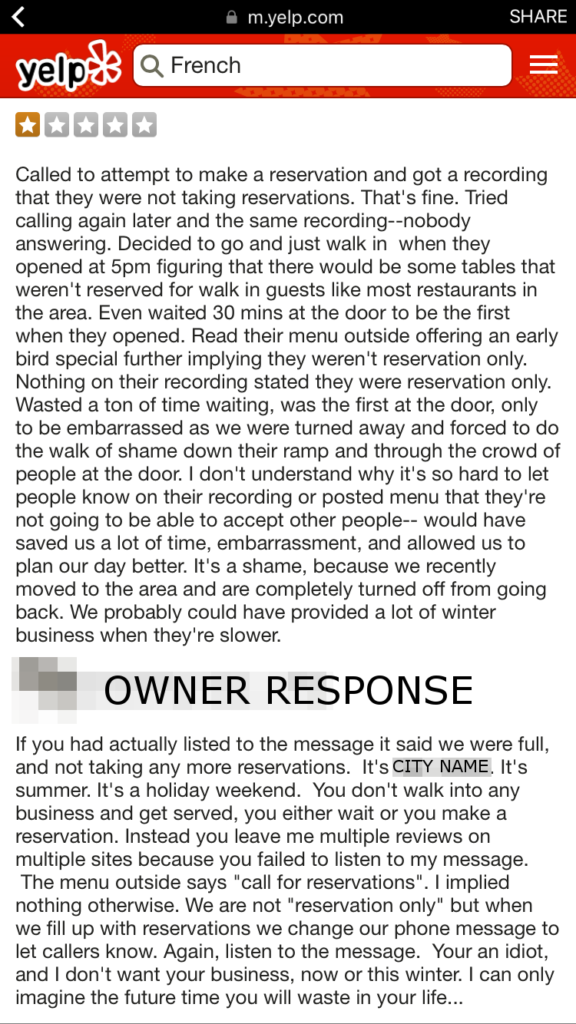 The owner of this restaurant was definitely in the right to point out that the reviewer hadn’t listened to their message in its entirety. Aside from a bit of attitude, they were doing pretty well before calling the reviewer an idiot and saying they never want their business. At that point, the response’s credibility is overshadowed by their childish name-calling.

This restaurant currently has 4.5 stars on Yelp. 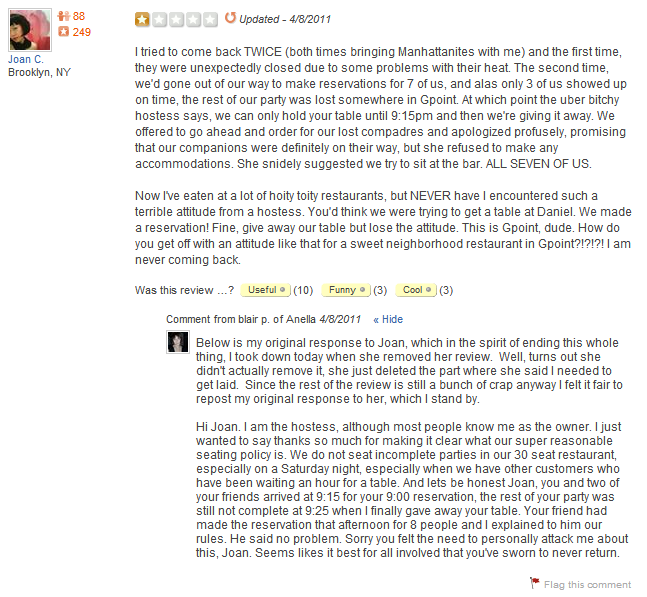 The owner of Anella used her response to provide details and context to a situation the reviewer glossed over. Clearly, the restaurant’s seating policy is in place, and enforced, for good reason. She politely pointed out that the half the party hadn’t shown and the portion that did arrive was 15 minutes late. She was respectful, even though the reviewer wasn’t. Compared to the first review, she was more tactful in her response and less aggressive, but you can still sense some frustration in her reply.

Anella currently has 4 stars on Yelp. 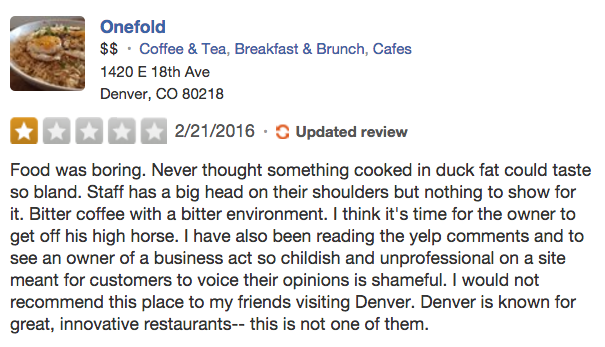 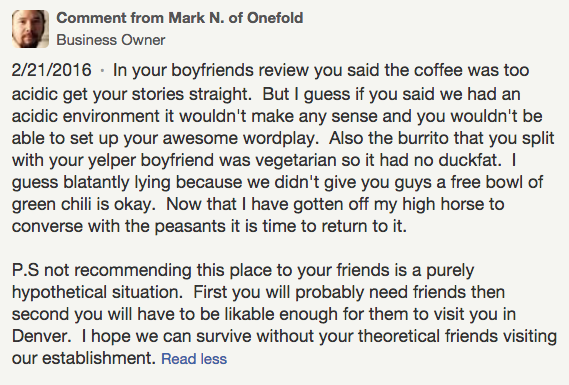 The owner of Onefold used his response to attack the reviewer’s character. Though he touched on concerns around their experience, he did so while calling them peasants and implying they have no friends. Any redemption for the establishment went out the window at that point. As I said earlier, management responses provide the opportunity to address the details that original reviews often omit. While the owner had the opportunity, he let his emotions dictate his response. Had he considered what outsiders reading the exchange might think, he may have changed his approach.

Onefold currently has 4.5 stars on Yelp. 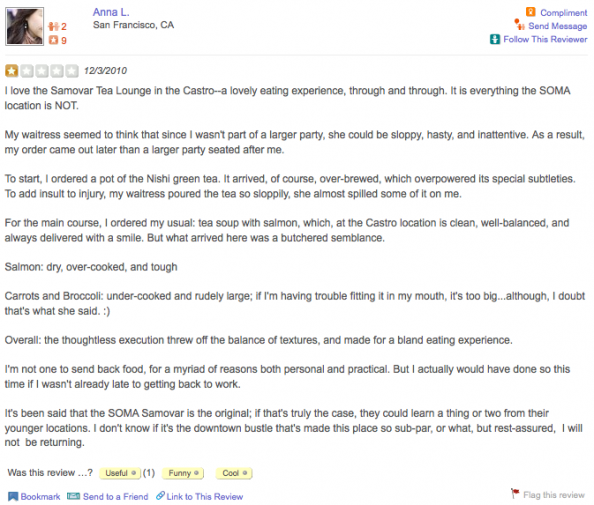 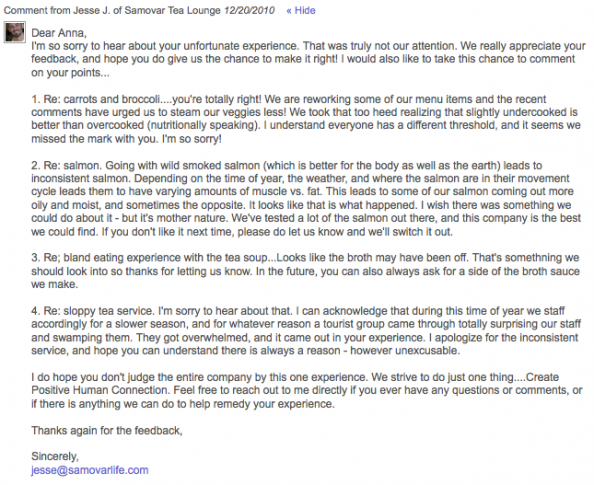 The owner of the Samovar nails it. The original review seems like she’s trying to be overly-witty with a slew of adjectives to describe her food and experience like she’s a judge on a cooking shows for the Food Network. Even so, he responds to each of the points the reviewer makes, acknowledging areas where the food and service could’ve been better without making too many excuses. He goes into a lot of detail regarding each of her complaints, which provides some needed context. He also makes it clear that they’ve not lived up to expectations and have already started putting remedies in place. I would call this the best Yelp response in this article. It shows that the restaurant truly values the feedback and spends the time to address customer concerns.

Samovar currently has 4 stars on Yelp.

Using facts over opinions and being respectful dramatically impacts the way an outsider would interpret the interaction. Luckily for a few of these chefs and/or owners, plenty of 4 and 5-star reviews have kept their reputations intact despite slip-ups. But every venue isn’t so lucky.

Now I want to hear from you. Are you in the “customer is always right” or the “take it or leave it” camp? I firmly believe that the ideal is a happy medium between the two, but clearly, there are examples of successful restaurants out there on both ends of the spectrum. Reach out to me at John@StockiExchange.com. I would love hear how you handle online reviews.